With the NBA and NHL playoffs in full swing once again, this spring will see new champions crowned in two of the U.S. major sports. And with each title comes bragging rights and a boost to community pride for the cities that the winning teams call home.

A select few U.S. metro areas have enjoyed bursts of success across multiple sports in recent years. In 2021, Tampa saw the NHL’s Lightning win their second straight Stanley Cup while the NFL’s Buccaneers captured the Super Bowl. Los Angeles has had recent titles from the NFL’s Rams (2022), MLB’s Dodgers (2020), and NBA’s Lakers (2020). And the 2010s saw strong runs in the Bay Area, with MLB’S San Francisco Giants and the NBA’s Golden State Warriors each capturing three titles, and in Boston, which has enjoyed three titles for the NFL’s Patriots, two for the MLB’s Red Sox, and one for the NHL’s Bruins since 2010.

But geographic dominance in the major sports in the U.S. is nothing new. Across 421 championships that have been awarded across the MLB, MLS, NBA, NFL, and NHL, nearly half have been won by teams from just six metropolitan areas: New York, Boston, Los Angeles, Chicago, Detroit, and San Francisco. These metros are among the nation’s largest and most historic, and in some cases have multiple teams competing in the same sport, which increases the chances of bringing home a title. But each of these locations has also enjoyed sustained excellence over time from one or more of their hometown teams. 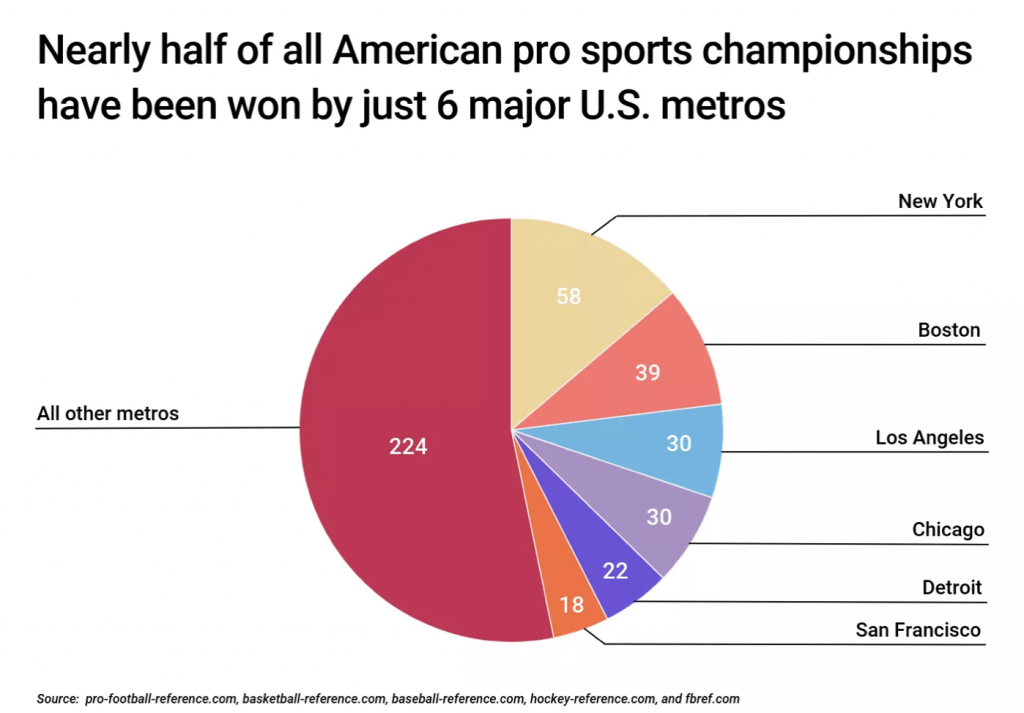 The success of teams in Los Angeles and San Francisco, New York, and Boston have respectively pushed California, New York, and Massachusetts to the top of the list of states with the most titles. Some other sports markets have been less fortunate. For example, Tennessee has four pro sports teams but has never won a championship in a major sport, while North Carolina is home to four teams who have combined for a single title.

For reference, here are the championship totals throughout history: