Responding to growing talk of Israel potentially targeting Hamas’s leader in the Gaza Strip amid a string of terror attacks, Defense Minister Benny Gantz said such decisions would not be discussed publicly, and should not involve politics.

“All operational and strategic decisions must be made behind closed doors and out of security considerations,” Gantz said when asked by a reporter on talk of Israel assassination Sinwar. “Politics should not enter into it. We must remain responsible on issues of security.”

While Hamas has not taken responsibility for most of the attacks in the wave that began in March that have left 19 people in Israel and the West Bank dead, terror group chief Sinwar has repeatedly called for Palestinians to assault Israelis and the group has publicly praised the perpetrators, encouraging more attacks.

The terror group also claimed responsibility for an attack that killed a security officer guarding the West Bank settlement of Ariel on April 29.

Some Israeli legislators and pundits have advocated killing Sinwar in response to the current terror wave, which he has urged on from the coastal enclave, and especially since three Israelis were killed in a terror attack in Elad on Thursday.

Hamas threatened on Saturday to return to suicide bombings and to “burn” Israeli cities if Jerusalem resumes its policy of targeted killings of senior terror figures.

Gantz vowed Saturday night that Israel will capture the two suspected terrorists who carried out a deadly attack in Elad on Thursday, killing three people, and “all those involved” in the incident. 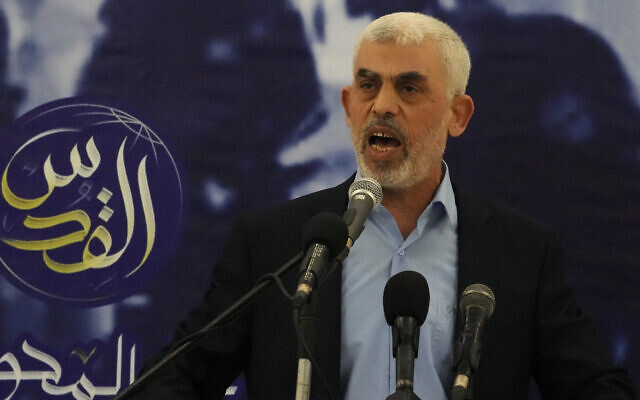 Yahya Sinwar, head of Hamas in Gaza, delivers a speech during a meeting with people at a hall on the sea side of Gaza City, April 30, 2022. (AP Photo/Adel Hana)

Gantz held a meeting with top military and security officials earlier Saturday as the manhunt for the terrorists continued some 48 hours after the attack. Military chief Aviv Kohavi, Shin Bet security agency head Ronen Bar and other top IDF commanders and Defense Ministry officials took part in the meeting.

“We will capture the terrorists and hit everyone involved in this incident,” Gantz said in a statement. “We are in the midst of a tense [period] facing [a] brutal terror [wave]. The IDF, the Shin Bet and the Police are cooperating… and we are examining and considering our steps.”

The search for the suspected terrorists expanded from the area immediately around Elad to also include a number of nearby Arab communities and the area of the West Bank security barrier.

A senior police official told the Ynet news site on Saturday that “as the hours go by, we are focusing more efforts on intelligence, even though we are still continuing our searches with large forces on the ground and in the air.” 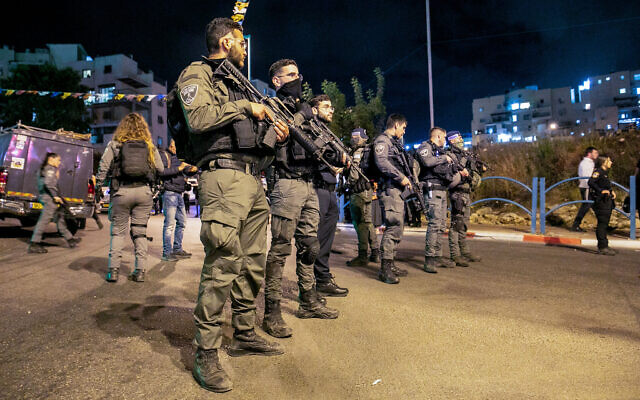 Security forces guard at the scene of a terror attack, in Elad, May 5, 2022 (Yossi Aloni/Flash90)

The report said security services were hoping that Palestinian suspects As’ad Yousef As’ad al-Rifa’i, 19, and Subhi Emad Subhi Abu Shqeir, 20, would soon make an error and expose their whereabouts. Both are from the village Rumana outside Jenin in the northern West Bank.

Suggested scenarios included the two moving to a new location, or seeking assistance from relatives or local residents.

We’re really pleased that you’ve read X Times of Israel articles in the past month.

That’s why we started the Times of Israel ten years ago – to provide discerning readers like you with must-read coverage of Israel and the Jewish world.

So now we have a request. Unlike other news outlets, we haven’t put up a paywall. But as the journalism we do is costly, we invite readers for whom The Times of Israel has become important to help support our work by joining The Times of Israel Community.

For as little as $6 a month you can help support our quality journalism while enjoying The Times of Israel AD-FREE, as well as accessing exclusive content available only to Times of Israel Community members.

Thank you,
David Horovitz, Founding Editor of The Times of Israel

Already a member? Sign in to stop seeing this