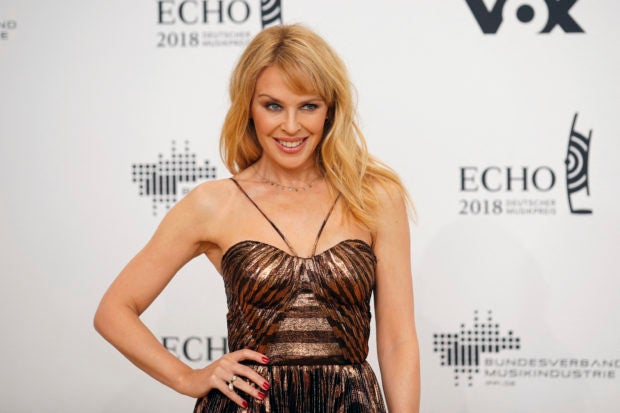 Australian singer Kylie Minogue poses during a photocall upon arrival for the 2018 Echo Music Awards ceremony on April 12, 2018 in Berlin. Image: AFP/Axel Schmidt

Kylie Minogue and Jason Donovan will return to Australian soap opera “Neighbours” for its finale after an absence of more than 30 years, the soon-to-be axed show’s creators said Sunday, May 1.

The Australian stars both launched their careers on the long-running program, which announced in March that it will cease production next month after nearly 37 years on small screens.

The show struggled to find a new home in Britain — where it has enjoyed a cult following for decades — after current broadcaster Channel 5 said it would not continue to carry it.

Before global stardom beckoned, Minogue and Donovan won popularity as an onscreen couple in the soap in the late 1980s and were secretly a real-life item at the same time, although their romance did not last.

“We are thrilled that Jason and Kylie have come home to play a very special part in our series finale,” the soap’s executive producer Jason Herbison said on Twitter.

“Scott and Charlene are the ultimate ‘Neighbours’ couple and it would not feel right to end the show without them,” he added, referring to the names of their onscreen characters. “It has been an emotional experience for them, for us and I’m sure it will be for our viewers.”

Melbourne-based “Neighbours,” which also launched the careers of Margot Robbie and Russell Crowe, announced nearly two months ago that it would end production.

A generation of Brits grew up watching characters such as Minogue’s Charlene Robinson and her onscreen beau Scott Robinson, played by Donovan, as well as an ensemble cast that over the years included Guy Pearce, Natalie Imbruglia and Liam Hemsworth.

The pair had already prompted speculation about a possible return after posting images on Instagram of what appeared to be a “Neighbours” script.

Minogue, known internationally simply as Kylie, first shot to fame through her time on the soap from 1986 to 1988, before she went on to a pop career.

The star teamed up with Donovan for the 1988 duet “Especially For You,” which sold more than a million copies in Britain alone and topped the charts across Europe and Australasia.

Donovan’s career since then has seen him star in musicals and speak frankly about his struggles with drug addiction.

The duo reunited on stage in 2012 — for the first time in over two decades — when they sang the 1988 smash hit at a show in London. AP/JB

The hottest entertainment news straight to your inbox

Don’t miss out on the latest news and information.