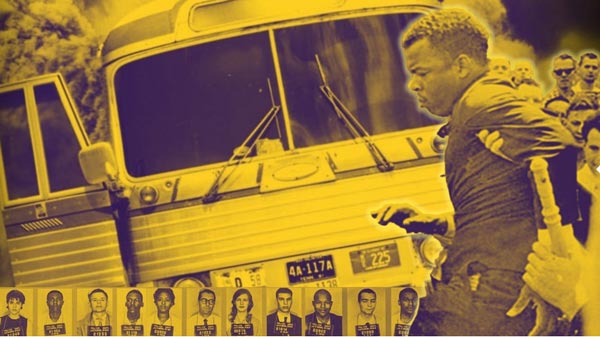 In the spring of 1961, hundreds of young people, black and white, boarded buses in the north headed for cities in the South to protest segregation on buses that had been outlawed by the courts but still used all over the southern states to discriminate against blacks.

The ever hopeful “Freedom Riders,” as they were called, did not expect the violence that greeted them in the South or the lack of protection by the police or local courts. That spring and summer, hundreds of them were beaten and jailed. Their story is told again, with great power, in the rousing play Freedom Rider at the Crossroads Theater, in New Brunswick, housed in the New Brunswick Performing Arts Center, that opened on Saturday (through (June 26). It is both very enjoyable and very moving.

The Freedom Riders are a vivid part of American history. In 1946, the U.S. Supreme Court banned segregation in interstate bus travel.   In 1960, the Supreme Court ruled in Boynton vs. Virginia that the ban on segregation in busing also applied to terminals, rest rooms, lounges, lobbies, ticket windows and any other areas connected to travel. One year later, the Congress of Racal Equality (CORE) and the Fellowship of Reconciliation decided to test the enforcement of the rulings by staging a bus trip to the South. They recruited a group of black and white young people who boarded buses in Washington, D.C., and headed to the deepest point they could find in the South, the city of New Orleans.  On the way, white riders used black bus facilities and blacks used white facilities.  They tried to integrate restaurants. The found trouble, lots of it.  In one of the worst incidents, a bus in Aniston, Alabama, was fire bombed and several freedom riders had to be hospitalized. In Montgomery, Alabama, the riders were badly beaten by a white mob. In all of the cities they visited there was little police protection.

Finally, the National Guard was called in to protect all of the freedom riders, but, despite that, many were still arrested and jailed.

All of this is recounted in Freedom Rider, developed by Ricardo Khan and written by him, Kathleen McGhee-Anderson, Murray Horwitz, Nathan Louis Jackson and Nikkole Salter. They did a fine job of giving the play a tight timeline. Remember, the story of the Civil Rights movement is huge and sprawling. Here, the writers started right when the bus trips began and ended it at the end of the first. Within that space and time, they told their story well. They also did not preach to the audience or take any liberties with history. Their history here is very accurate.

Advertise with New Jersey Stage for $50-$100 per month, click here for info

It is not the play I expected. I expected a drama about the big people in the story – people like Martin Luther King Jr. and Jack and Bobby Kennedy. I expected a story about riots, massive beatings and street violence. I expected a big, big story.

It is not. Oh, the big people are mentioned and the violence noted, quite dramatically (especially the bus firebombing), but this is a small play. It is the personal story of the freedom riders and, in many, scenes, their parents. Why did those young people get on those buses, and stay on them, after the violence started? How did their parents view their children’s stubbornness (and bravery). There is a wonderful scene of several riders calling their moms on Mother’s Day and talking about the bus trip. You can see the worry in their parents faces and hear it in their voices. All of those small stories of the riders stitched together, give this play its strength. I worry like that about my son – every day – just as they did. All of that comes out in the play and you realize that their story is our story, also.

There are marvelous stories, too such that of white Joan, who leaves her black boyfriend to join the trip and yearns for him as much as she does bus integration. There is Phil, a Jewish boy from Wittenberg College who worries that he’s going to miss finals and get bad grades if the quest for American freedom takes too long. There is tall and sturdy Carl, the African American who stares down a cop at a restaurant and gets beat up for it – and then gets back on the bus.

The play has some minor flaws. At just over two and a half hours it is a bit long. The writers might trim some of it. The play also drags a bit midway through act one. It needs more about national media coverage of the Freedom Riders. A major factor in the success of the Freedom Riders was press coverage. The May 14 trip South met with significant trouble when the bus was burned in Aniston. The press coverage of the bus burning – hundreds of newspaper photos, added to the riot that took place at the Birmingham, Alabama trailways bus terminal, and coverage of it by the media, created much negative press against white segregationists in the South. The June 1, 1961 photo of the Freedom Riders on the cover of Time magazine did even more. White journalist Howard K. Smith was in Birmingham and reported on the violence against the back riders there on the CBS radio network, calling the whites “thugs” and reporting how a dozen whites beat up a black man, knocking his face into “a bloody pulp.” (parts of Smith’s reporting are in the play). Life Magazine made the Freedom Riders it’s featured story of the week.

As more bus trips were taken, and many more arrests made, there was extensive national press coverage of the Freedom Riders, in print and on television, that dramatically helped their cause. 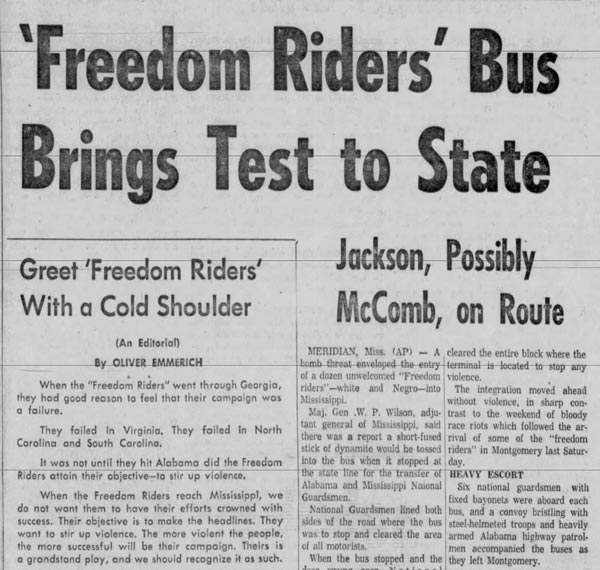 Southern political leaders and the Southern press were against the freedom riders, but national press coverage portrayed them more as righteous victims of segregation. Press coverage changed the conscience of the nation towards black activists.

Later, Civil Rights leader Martin Luther King Jr. was quite successful in getting massive national press attention for his marches in the South and that press coverage helped significantly in the Civil Rights movement. The play needs more of that. There is a discussion of a black Baltimore newspaper account of the bus trips, but not of the mainstream newspaper coverage.

These are but tiny criticisms, though.

Beowulf Borrit and Katherine Freer have created a marvelous jailhouse like video screen on which actual black and white footage of the freedom rider buses, and numerous protests, are shown. Myrna Colley Lee has done good work in costume design, as had Victor En Tu Tan with lighting.

Freedom Rider is a sweeping, powerful story about a critical moment in United States history. Has America moved forward racially since 1961? Yes, it has. Americans have taken huge steps forward, but there is still a long distance to go. Will we get there? We will, but it will take time. After all, it has been sixty years since the Freedom Riders. That’s a long time and we still have nagging racial troubles.

The Freedom Riders live on in history and in us, though,

Advertise with New Jersey Stage for $50-$100 per month, click here for info

Speaking of their legacy and how it connects to life in America today, the most poignant moment in the  play is the very last one when, all of a sudden, without any warning, an enormous BLACK LIVES MATTER slogan is projected in huge letters that cover the entire back of the stage.

Then the play ends. The story, though, certainly does not.

Bruce Chadwick worked for 23 years as an entertainment writer/critic for the New York Daily News. Later, he served as the arts and entertainment critic for the History News Network, a national online weekly magazine. Chadwick holds a Ph. D in History and Cultural Studies from Rutgers University. He has written 31 books on U.S. history and has lectured on history and culture around the world. He is a history professor at New Jersey City University.