SANTA TERESA, N.M. — The Mexican government said it intends to shift long-range plans to build a trade railway connection worth billions of dollars from Texas to New Mexico in the wake of Gov. Greg Abbott’s stepped-up border inspections last month, which were widely criticized as being financially damaging and may now leave a lasting impact on relations between Texas and its No. 1 trading partner.

Mexican Economy Minister Tatiana Clouthier said a planned rail and ports expansion — known as the T-MEC Corridor — to connect the Pacific port of Mazatlán to the Canadian city of Winnipeg would not use Texas, but instead the rail line would be routed along the far edge of West Texas up through Santa Teresa, N.M., about 20 miles west of downtown El Paso.

“We’re now not going to use Texas,” Clouthier said at a conference April 28 in Mexico City. “We can’t leave all the eggs in one basket and be hostages to someone who wants to use trade as a political tool.”

Clouthier was referring to what Mexican and U.S. officials and business leaders on both sides of the border have described as chaos generated by Abbott’s April 6 order requiring that all commercial trucks coming from Mexico to Texas go through “enhanced” safety inspections. Abbott said the move was necessary to crack down on human and drug smugglers.

Critics pushed back, saying the governor’s move was motivated by politics and noting that commercial trucks are already checked by U.S. federal authorities. They also noted that border security is a federal responsibility, and that while DPS officials can conduct vehicle safety inspections, they have no authority to conduct searches.

DPS has not reported finding any unauthorized migrants or illicit drugs during the 10-day period of stepped-up inspections, although numerous safety violations were found. The slow pace of inspections and protests led by truckers upset at the delays led to routine backups of five to 12 hours at commercial border crossings. Some truckers interviewed by The Dallas Morning News said they had to wait three days to cross.

Abbott ordered an end to the inspections after the governors of Mexican states bordering Texas presented him with border security plans — mostly work already in progress — that he could tout through newly signed agreements at news conferences.

Jerry Pacheco, president of the Santa Teresa-based Border Industrial Association, called Clouthier’s announcement “a very positive step for New Mexico,” but cautioned that such a project will take years to complete and “anything can happen in that time.”

“I don’t think they’ve even gotten to finish a design yet,” Pacheco said. “So this is very much in the preliminary stages, but the very fact that we’re being discussed in the early stages is a positive thing. If this particular project doesn’t work out, there’ll be other projects that the Mexican government will have and they’ll speak favorably of New Mexico because they know we want to work with them in a constructive way.”

Pacheco said he’s already seen a sea change from the business community in Mexico and the United States.

“It’s been very interesting, but since Gov. Abbott’s truck inspections went away, our traffic numbers remain higher than normal in terms of northbound cargo shipments, which leads me to believe that what I thought would be a temporary fix is actually going to stick in the long term,” he said. Ciudad Juárez and El Paso business leaders “are referring to us now as a ‘very effective delivery route.’ ”

In many ways, Abbott’s inspections only boosted Santa Teresa, an already thriving community with a port of entry where companies also produce materials and components for factories in Mexico that assemble everything from computers, wind blades, consumer electronics and processed foods to automobiles and industrial equipment that they then ship back to U.S.-based businesses.

Industrial parks in Santa Teresa house big warehouses for products constantly crisscrossing the border, backed by a transportation network that includes an airport and railroad and distribution firms that manage the constant movement of goods in all directions. The entire industrial zone operates as one of the nation’s largest inland ports for truck-and-train transshipments across North America, although Laredo is the No. 1 crossing point for commercial rigs.

The Santa Teresa port has long offered a rapid alternative to congested border crossings in El Paso, where it generally takes two hours or more for northbound trucks to enter the U.S. In contrast, it takes it can less than 20 minutes in Santa Teresa, according to Pacheco.

“For businesses who haven’t used Santa Teresa Port of Entry, think of this alternative as a great, necessary idea,” said Franz Felhaber, president of Felhaber and Company Inc., a customs brokerage company that serves clients on both sides of the border.

During the chaotic week after the stepped-up Abbott inspections began, Felhaber and other customs brokers and trucking companies began rerouting commercial vehicles from El Paso to New Mexico to bypass Texas.

“As long as Abbott wants to mess with the supply chain, New Mexico is a solid Plan B,” Felhaber said. “We need options.”

Abbott has threatened to resume the inspections if he feels border security is not adequate. That has business and trade experts wary, because migration across the southwestern border is already expected to rise from about 6,000 people a day to up to 18,000 a day this summer due to seasonal shifts and the planned lifting of the pandemic-related health order that allows for rapid expulsion of migrants on May 23.

Business leaders are quick to say they support border security, but continue to worry about things that affect the more than $661 billion in trade between the U.S. and Mexico. “I don’t disagree with what Abbott did, I mean, he had to do something to try and protect us on the border, but he also created a far more serious problem than I think he envisioned,” said James K. Robinson, president of JH Rose Logistics, which provides trucks for international trade in this border region. “It just made a mess for the supply chain, so to speak.”

Here in Santa Teresa, a small, feisty community with a big heart, things seem to be looking up. Several million-dollar, state, private and federal infrastructure projects are underway throughout southern New Mexico, including in Santa Teresa and Sunland Park, just across the Texas state line, Pacheco said, adding that annual trade between New Mexico and Mexico is about $2.8 billion, a drop in the bucket compared to Texas.

In February, the most recent month for which data was available, goods worth $39.5 billion were trucked across the Texas-Mexico border in both directions.

Abbott’s recent actions on the border, Pacheco said, underscore the differences between Texas and New Mexico.

“We also absolutely play politics with the border, but we play to bring more trade from Mexico through our New Mexico ports of entry, not to impede trade,” he said. 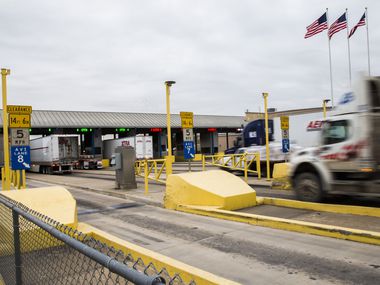